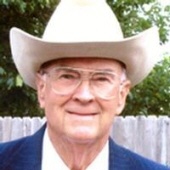 Cletus Ray Caswell was born on February 6, 1926. He passed from this earth on June 28, 2015. He was born in Hollis, Oklahoma to Charlie Douglas and Bessie Mae (Walls) Caswell. He was the seventh son.

Cletus grew up in the Meadow area where he was to meet the woman “who made his world go round and round, and his socks roll up and down.” He met Mildred Maurine Minter while hoeing. They soon began hoeing together. He traded his prize chickens to his little brother Neal to ask her out for him. She refused until Cletus could ask for himself. They married on October 16, 1943, with both of them only 17 years-old. They made their home north of Meadow. He joined the army when he turned 18 and went to the European Theater. While in the service Cletus received the Bronze Star for participating in the Battle for Central Europe. He also received the European Theater of Operations medal, two Good Conduct medals, Victory medal, Korean Service medal, three Overseas Service bars, and was awarded a Commendation for bravery for saving the lives of his men by disarming an explosive found in a barracks. He was very proud of his service in World War II.
After returning home to farm, he felt God’s call on him in 1953 to enter the ministry. He attended college at Wayland Baptist College. He served as interim pastor at First Baptist Church, Meadow and then became the pastor at Union Baptist Church near Brownfield. He pastored Woodrow Baptist Church near Lubbock for eight years before returning to Union to pastor for 23 more years. He also continued to farm and ranch while pastoring and he was most at home “outstanding in his field.”

Cletus and Maurine retired to the farm and then, as health began to fail, reluctantly moved into town where he lived out his remaining years.

Services will be held at 2pm Tuesday, June 30, 2015 at Brownfield First Baptist Church.

Donations may be made to the First Baptist Church Building Fund, or to a charity of your choice.
The Caswell’s would also like to thank Norma Madrigal. Janie Constancio, and Tomasa Longoria for their loving care for our husband, daddy, and granddaddy. He loved you all.