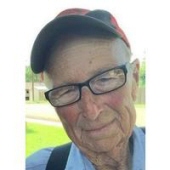 Clyde passed away at his home in Brownfield January 11, 2017. He was born October 6, 1936 to O. D. and Margaret Ruth Kennedy in Terry County. Clyde graduated from Seagraves High School in 1956. He married Jane Teal on January 6, 1977 in Tahoka. He was a member of Seagraves First Baptist Church. Clyde’s passion in life was farming. He also enjoyed watching his favorite car shows and mechanicing himself. He is preceded in death by his parents, O.D. and Ruth Kennedy.