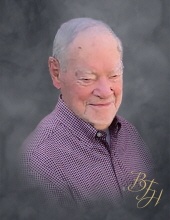 Funeral services for Coke C. Toliver will be held at 10 am Thursday, February 3, 2022, at the Brownfield Funeral Home with Rev. Chris Seaton officiating. Burial will follow in the Terry County Memorial Cemetery.

Among his many accomplishments, Coke served his country in World War II in the Asia-Pacific Theater. In 1949, he and his beautiful wife Oleta moved to Brownfield, where he was employed by the Boy Scouts of America, as a professional scout. Soon after, Coke began his lifetime career, working for Amoco Production Company, where he was a valued employee for more than 30 years.

After his retirement, Coke began to pursue his personal interest in the study of archeology, with an emphasis on the American Indian culture and its history. He and Oleta were very dedicated to sharing their vast knowledge of artifacts, events, and memorabilia with other people, as they traveled around the United States.

Coke was a 32nd Degree Mason and was an active participant in the Brownfield Masonic Lodge. He was always very community minded, and he and Oleta were valued supporters of the First United Methodist Church of Brownfield for more than 70 years.

Coke was especially proud of his family, and is survived by his wife, Oleta, his children, Dr. Cliff Toliver of Reeds, MO, Alice Drake (Glenn) of Dallas, TX, 2 grandsons, Benjamin Drake and Zachary (Erin) Drake of Dallas, and his 2 precious great-grandchildren, Madeline and Hunter Drake, also of Dallas.

Coke was a loving son, husband, father, grandfather, and friend. He spent his entire life giving unselfishly to others, and he brought wisdom and strength to everyone who knew him. He was preceded in death by his parents, 3 brothers, and 5 sisters. He will forever be missed, but never forgotten.