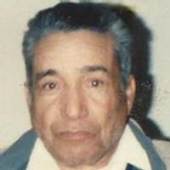 Services for Conrado Zepeda Castro, 83, of Brownfield will be held at 2pm Wednesday, December 31, 2014 at Living Water Foursquare Church with Rev. Rudy Alvarado officiating. Burial will follow at Brownfield Cemetery under the direction of Brownfield Funeral Home.

Family visitation will be held from 6pm to 8pm Tuesday, December 30, 2014 at Brownfield Funeral Home.

Conrado was born on March 12, 1931 to Demetrio Castro and Natividad Zepeda in Sweetwater. He married Jesusa Riojas in Levelland on December 6, 1949 and the couple moved to Brownfield shortly thereafter.

In spite of limited formal education, Conrado accomplished great things, first obtaining his Journeyman Plumber’s license and later, his Master Plumber’s license. He enjoyed helping people and had a talent for fixing things. His passion was spending time with his family and friends, especially playing with his many grandchildren.

Conrado was preceded in death by his loving wife, Jesusa and a son, Eliazar Castro. He is survived by 2 sons, Demetrio Castro and wife Lupe of Brownfield, and David Castro of Brownfield; 3 daughters, Josie Quintanilla, Rachel Franco and husband David, and Jo Ann Curiel and husband Sonny, all of Brownfield; a nephew, Paul Ramirez of Tatum, NM who was like a son to him; 16 grandchildren, 30 great-grandchildren, and 1 great-great granddaughter.