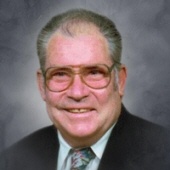 Funeral service for Coy Jones, 88, will be held at 11:00 am, Thursday, May 16, 2019, at the First United Methodist Church with Rev. Ruby Moultrie and Rev. Francisco Escalera officiating. Visitation will be held on Wednesday, May 15, 2019, from 5 pm to 7 pm at Brownfield Funeral Home. Online condolences may be left at www.brownfieldfuneralhome.com.
Coy was born July 11, 1930, to Elry and Nellie (Carroll) Jones in Crowell. His family moved to Brownfield in 1943, and he graduated from BHS in 1948. He received a football scholarship to San Angelo Junior College (Angelo State University) later transferring to Texas Western (UTEP) where he received a degree in Physical Education.
Coy was drafted into the Army in 1952 and served in the Counter Intelligence Corps. He returned to Brownfield in 1954 and taught 8th Grade Science for two years, and then was the Boys PE Instructor and Coach for ten years. Coy continued his education and received his Masters and a Counseling Certificate from West Texas State. He then served as the Brownfield Middle School Counselor for twenty-six years.
A member of First Methodist Church, Coy served in many capacities over the years including Public Address Operator, Youth Worker, Trustee, President of the Methodist Men, a church bus driver and many other positions. He was also a member of Noon Lions and served as a Tail Twister and Lion Boss as well as other offices. Coy was a dependable Blood Donor Recruiter and received his 5 Gallon Pin for his own donations.
Coys family describes him as a good son, a loving husband, father and grandfather. He was an avid sportsman, hunter and fisherman who was also known for being a strong, persistent worker. Coy was a charitable friend to all and is remembered for his loveable and out-going personality as well as his wonderful sense of humor. He is preceded in death by his parents.
Survivors include his beloved wife, Martha Loy "Dixie" Jones; 3 sons and their wives, Matt and Sherry Jones of Tyler, Russ and Pamela Jones of Aledo, Walt and Kim Jones of Arlington; 1 daughter and her husband, Martha and Clay Everheart of Bronte; 6 grandchildren, Joshua Jones of Lubbock, Ryan and Amanda Everheart of Bronte, Caleb and Lacy Jones of Memphis, TN, Caitlin Jones of Addison, Seth Jones of Jonesboro, AR, and Rachel Everheart of San Angelo; and 3 brothers, Loman Jones of Levelland, Lee Allen Jones of Los Angeles, CA and John Eldon Jones of Tyler.