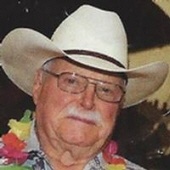 Dan Armistice Day was born November 11, 1928 to Cacy Thomas and Margaret May Overhuls Day in Lubbock. Dan graduated from Roosevelt High School and then served in the United States Army during the Korean War. After an honorable discharge Dan married Roberta Vada Alexander on December 27, 1953 in Sundown. He was a farmer and rancher for 69 years in Meadow. Dan also owned Day Estates LTD in Lubbock. He was a member and church elder at the Brownfield Church of Christ. Dan was also a member of the Camp Blue Haven board of directors from 2002 to 2006 and the South Plains Underwater Conservation District from 1992 to 2006, on which he served as president on the board of directors from 2002 to 2006. He is preceded in death by his parents Cacy and Margaret Day; sister, Viola Day, and twin brother Don Day.