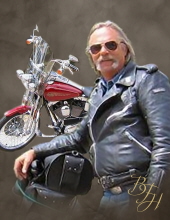 Daniel D. Rogotzke, (age 70) of Brownfield, Texas succumbed to a long battle with cancer on January 21, 2022. "Dan" was born in Springfield Minnesota on August 29, 1951, to Elvin & Bernice "Bunny" Rogotzke. Dan graduated from Springfield High School in 1969. He then joined the United States Air Force and served his country through the Vietnam war while stationed in Spokane, Washington at Fairchild Airforce base and served overseas duty in Guam working on KC-135 air refueling tankers for the B-52 squadron. He attended Eastern Washington University in Cheney, Washington. Dan is preceded in death by his first wife, Coby Miller of Spokane, Washington.

He later settled in Brownfield Texas and is survived by his second wife, Cyndra Bartlett-Rogotzke, and his third wife, Debbi Jackson-Foshee; each of whom continued being a great source of friendship & support throughout Dan's life. Dan is survived by his two brothers; Tom Rogotzke of Campbell, California & John Rogotzke, of Snyder, Texas, his children; Shana Gaunt & husband Mark, Kristen Jacobs, Joshua Rogotzke, Cyarah Rogotzke, Jeff Jackson, three grandchildren and two great-grandchildren.

Not to be forgotten; A niece, great-nephews, cousins, his beloved best friend and companion Shasta, who nursed him & loved him endlessly and the "chosen family" of the dear friends that Dan had throughout his life's journey with his dedication in the service, his work, through his love of music or in just knowing and loving Dan.

Dan had a heartfelt, contagious laugh with "snorts" that we all loved. Overall, Dan was a very upbeat, soulful person with an inquisitive personality. He spent a great deal of time introspecting to understand what his "purpose" was in life. He was a very open-minded individual with special interests in spirituality, existentialism, politics, the universe and the way of the world. His most beloved hobbies were riding motorcycles; where he took cross country trips, attended multiple Sturgis motorcycle rallies, playing the piano, music, fast cars, and shooting with his boys.

Dan has had a great influence in many of our lives and in our hearts. He will be greatly missed by all. We are all grateful that he is now at peace and has now hopefully received all the worldly answers that he has so diligently been seeking for so many years.
No memorial service or celebration of life is immediately planned. The family will notify loved ones in the future when a service is scheduled.