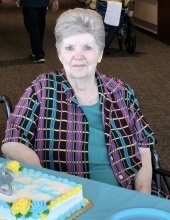 Darla Walker was born to Carl and Laura Walker of Littlefield, TX in 1933. She was next to the youngest of 14 children.  She leaves behind one sister LaVey Neal of Coppell, TX. She married Don E. Wise in 1955 and moved to Brownfield in 1964 where she lived until March 2018. At that time, she moved to Lubbock into long term care. She was preceded in death by her husband Don Wise in December 2010.

She became the first “Lady Barber” in Brownfield opening her own shop, The Wise Barber Shop in 1970 for 25 years after working in other shops prior.  She cut hair for 42 years before finally retiring or as the newspaper said, “She put down her scissors.”