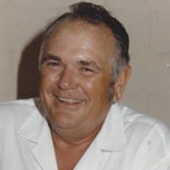 Memorial services for Dewey Don Henley, 83, of Brownfield will be held at 1:30pm Friday, July 28, 2017, at the Brownfield First Christian Church with Rev. Ken Reeder officiating.

Dewey passed away July 24, 2017, in Brownfield. He was born May 4, 1934, in Hermleigh to Thomas and Annie Henley. Dewey served in the United States Army during the Korean Conflict. He worked as a police officer in Lubbock from 1957 to 1961 and then in Midland from 1961 to 1964. He was a long time employee of Hamilton Acoustical. Dewey married Celeste Henley October 21, 1977, in Brownfield. He was a member of the Brownfield First Christian Church, and he was a Grand Master Mason. Dewey was full of life and loved to dance.

He is preceded in death by his wife, Celeste, two sisters, two brothers, one grandchild, and one great grandchild.

The family requests in lieu of flowers to be made donations to the Brownfield First Christian Church 1501 Tahoka Road Brownfield, Texas 79316