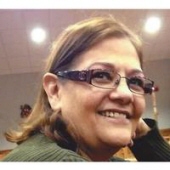 Funeral services for Diana Arguellez Gonzalez of Bryan will be held at 10am Thursday, April 7, 2016 at St. Anthony’s Catholic Church with Father Eduardo Teo officiating. Burial will follow in the Brownfield Cemetery under the direction of Brownfield Funeral Home.

Diana passed away Sunday, April 3, 2016 in Bryan. She was born August 10, 1955 in Brownfield to Jesus and Alicia Arguellez. Diana graduated from Brownfield High School. She married Albert Gonzalez on February 9, 1974 at St. Anthony’s Catholic Church in Brownfield. Diana worked at United Supermarket for 26 years. She loved to ride with her husband on his bike and she enjoyed sewing. She also loved spending time with her grandsons. She was a strong woman that fought cancer for 20 years. She is preceded in death by her father, Jesus Arguellez.