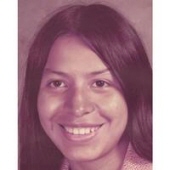 Services for Diana Vasquez, 58, of Brownfield, will be at 10 am Thursday, October 22, 2015 at St. Anthony’s Catholic Church with Father Eduardo Teo officiating.

Diana passed away Monday, October 19, 2015 in Lubbock. She was born on August 12, 1957 to Robert and Petra Ruiz Vasquez. She was a homemaker, member of St. Anthony’s Catholic Church, and a loving mother to everyone.

Diana is preceded in death by her parents and a son, Mark Anthony Vasquez.