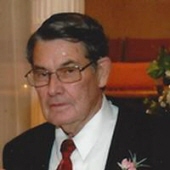 Funeral services for Donald C. Pendergrass, 80, will be held 10am Wednesday, June 21, 2017 at Meadow First Baptist Church with Rev. Patrick Hamilton officiating. Burial will follow in the Meadow Cemetery under the direction of Brownfield Funeral Home.

There will be a family visitation from 6pm to 8pm on Tuesday, June 20, 2017 at Brownfield Funeral Home.