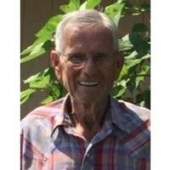 Donald Lee Moore left this life August 4, 2016, just short of his 88th birthday. Don was born in 1928 in Hunter, KS to Forrest & Beryl Moore. He married his high school sweetheart, Wanda, on August 7, 1949. Don served as a Corporal in the U.S. Army during the Korean War. Their family lived in Hunter, KS; Quinter, KS; Plainview, TX; Goodland, KS and Brownfield, TX.

Since 1981 Don has been a resident of Brownfield, where he was the Petroleum Manager of the Brownfield Co-op. He retired in 1996 and spent the next 10 years as the primary caretaker for Wanda. When she passed in 2006, he struggled with moving forward without her. With love and support from his family and Hospice of Lubbock, his generous spirit was renewed. He found purpose with his many projects, and “working” estate sales & pecan harvests, as well as helping with the relocation of the Senior Citizen’s Center. He enjoyed driving friends to appointments and helping his neighbors with projects around their homes. Don was a regular blood donor at United Blood Services. He received many t-shirts for his donations, and had them made into quilts for his family.

In the past 10 years, Grandpa Don never missed a grand or great’s football, basketball or baseball game, school play, or dance recital. He was so pleased that his entire family lived in Lubbock and that he was able to participate in their lives. Holidays were spent at one of his daughter’s homes with family, friends & bonus family in attendance. He was able to be a part of his two oldest grandson’s weddings and loved the addition of more great-grandchildren.

Proving it never too late, Don was blessed to find joy, love, and companionship with his special friend, Dixie. They shared many special memories & adventures.

A Memorial Service will be held Saturday, August 13th at 2pm at the Brownfield Senior Citizen’s Center, 1201 Tahoka Rd., Brownfield. Services will follow in Hunter, KS, at a later date. Flowers many be sent to the Memorial on August 13th, or donations may be made in Don’s honor to the Texas South Plains Honor Flight, Box 94787, Lubbock, TX 79493