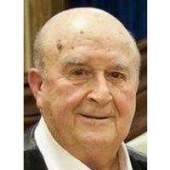 A Memorial Service for Donald Murrel Sales, 77, of Brownfield will be at 10:00 am, Friday, September 18, 2015 at Calvary Baptist Church with Troy Cartmill and Monty Henson officiating.

Family visitation will be Thursday, September 17th from 6-8 pm at Brownfield Funeral Home and online condolences may be made at www.brownfieldfuneralhome.com.

Donald was born on July 19, 1938 to Murrel and Eunice Sales in Lynn County. He worked as a Service Manager for John Deere for 35 years in Dallas and Brownfield and farmed in his latter years. Donald never met a stranger and was passionate about ministering to everyone he came in contact with. His family came first, but he also had a special place in his heart for incarcerated men, allowing the prison to utilize his farm as a work program. His many “turn-row” sermons were well received because it was obvious that he cared. Donald was highly respected by all who knew him.

Donald married the love of his life, Patricia Huff, on June 2, 1958 in Durant, OK. He was a loving father who was always there for his family. “Papa” was a special favorite of his many grandkids and great grandkids. Donald was a member of the Immanuel Baptist Church in Brownfield for 47 years and was involved in a Men’s Prayer Group that met weekly.

Donald was preceded in death by his parents and 1 sister, Ann Beard. He is survived by his loving wife, Pat; 3 sons, Donnie Sales of Orange Grove, Duane Sales and his wife Shay of Kingwood, and Dennis Sales and his wife Rosa of Brownfield; 1 daughter, De Ann Lohmann and her husband Brad of Winnie; 10 grandchildren and 10 great-grandchildren; 3 sisters, Jo Waldrip of Pampa, Janice Cartmill of Lubbock and Libby McGehee of Southland; and 1 brother, Ronnie Sales of Lubbock.

In lieu of flowers, the family requests that contributions be made to the American Cancer Society or your favorite church or charity.