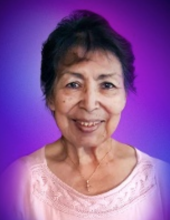 Funeral services for Dora Marez, 75, of Brownfield will be held at 10 am Saturday, August 10, 2019, at St. Anthony’s Catholic Church. Burial will follow in the Brownfield Cemetery under the direction of Brownfield Funeral Home.

There will be a rosary held starting at 6 pm on Friday, August 9, 2019, at Brownfield Funeral home.

Dora passed away Wednesday, August 7, 2019, in Brownfield. She was born November 24, 1943, in Muleshoe to Perfecto Grimaldo and Eduarda Rojas. She was a member of St. Anthony’s Catholic Church. Dora married Monico Marez on September 3, 1961, in Brownfield. Dora was an amazing mother, grandmother, and great grandmother. She was a caring and forgiving person, a friend to all that met her. Dora was a strong and independent woman that was full of advice if you needed or wanted it. Dora was a person you could confide in. She never met a stranger; she was the type of person that made friends everywhere and anywhere she went. Dora is preceded in death by her parents Perfecto Grimaldo and Eduarda Rojas, one sister Lupe Gamez, brother Perfecto Grimaldo, and grandson Derrick Nathaniel Marez.