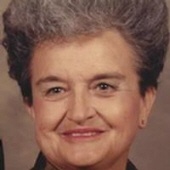 Services for Dorothy Faye Liles, 89, of Meadow will be held at 10 am Monday, April 13, 2015 at Meadow First Baptist Church with Bro. Leslie Lewis officiating. Burial will follow in the Meadow Cemetery under the direction of Brownfield Funeral Home.

Visitation will be held from 3-5pm on Sunday, April 12, 2015 at Brownfield Funeral Home.

Dorothy Faye Liles of Meadow passed away on April 9, 2015 in Lubbock. She was born September 21, 1925 in Fannin County to David and Nora Gregg. She was one of seven children. As a child she attended school in Trenton, TX. The Gregg family moved to Meadow to farm during her senior year in high school. She graduated from Meadow High School. Dorothy married Robert Liles on June 8, 1943 in Lovington, NM. Robert served in the U.S. Navy following their marriage. During this time they lived in San Diego and Seattle. Following the war, they returned to Meadow to farm. They raised three children, Jerry, Dennis and Danette. A fourth child, Douglas Edwin died on September 8, 1949, soon after his birth. After celebrating their 50th anniversary in 1993, Robert passed away in 1997. Dorothy is also preceded in death by her brothers, Ulyss, Wayne and Delton and her sisters, Erma Knight, Grace Carter and Nadine Cain.

The family expresses heartfelt gratitude to Glenda Mooney from Hospice of Lubbock and also Tammy Lucio from Promised Land for their help and care. In lieu of flowers please make donations to the Meadow Museum, Meadow Cemetery Association or a charity of your choice.