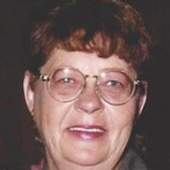 Dorothy was born on July 14, 1942 to Ray and Inis (Letterman) Phillips in Bruner, MO. She attended a one-room schoolhouse and was working with her family in a potato factory in Greely, CO when she met the love of her life, Eugene Griffing. They married on November 24, 1959 in Clovis, NM and settled in Lubbock. In 1969, they moved to Brownfield and Dorothy began her professional career as an antiquities dealer and owner of Dottie’s Antiques. She was also an avid real-estate investor and bought and sold many homes in Brownfield over the years.

Her family lovingly refers to her as “the boss,” and remembers that she never met a stranger. She was a familiar face at the Senior Center and never missed an occasion to send a greeting card. She proved her strength by surviving both lung and colon cancer.

Dorothy was preceded in death by her parents, and 2 brothers. She is survived by her husband, Franklin Eugene Griffing of Brownfield; 2 sons, Don Griffing of San Angelo and Jimmy Griffing and his wife Kendra of Lubbock; a brother, Paul Phillips of Yuma, Colorado; and 5 grandchildren.