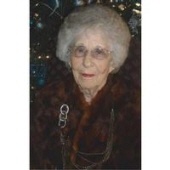 There will be a family visitation for Earlene Forbis Martin, 98, of Brownfield from 2pm to 4pm Sunday, November 20, 2016 at Brownfield Funeral Home. Private family services will be held at a later date.

Earlene passed away November 17, 2016 in Brownfield. She was born February 14, 1918 in Grayson County to R.C. and Causby Keith Forbis. She married Don H. Martin January 18, 1942 in Ropesville. Earlene was a lifetime member of the Church of Christ. She worked at the Brownfield Hospital for several years, and she also cooked for several years for civic clubs. She is preceded in death by her husband, Don H. Martin; parents R.C. and Causby Keith Forbis; 5 brothers, Alvin Forbis, Dub Forbis, Gene Forbis, Glen Forbis and Doyle Forbis.