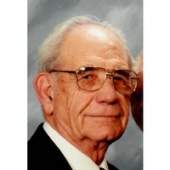 There will be a family visitation from 5pm to 7pm Sunday, October 15, 2017, at Brownfield Funeral Home.

Dale passed away Saturday, October 14, 2017, in Lubbock. He was born January 9, 1928, in Dickens County to E.V. and Alma George. After graduating from Brownfield High School in 1945 Dale served in the United States Army. After being discharged he married his high school sweetheart, Trucene Lindsey on February 25, 1948, just three days prior to becoming a member of Brownfield First Baptist Church. Their marriage lasted more than 69 years. Dale worked as a cotton ginner since 1957, and he retired from West Gin in 2005. Dale was assistant superintendent, usher, and served over forty years on the Counting Committee at Brownfield First Baptist Church.

He is preceded in death by his wife, Trucene George, parents, sister, Thelma Moore, and grandson, Scotty George.