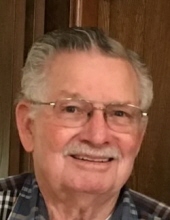 Eddie Frank Foshee passed away on December 19, 2020 in Lubbock. He was born on June 12, 1937 in Knox City,  Texas to Burton (Red) and Ruth Foshee. Eddie married Sharon Kennedy in Brownfield on March 21, 1959. Eddie was a farmer. He was a founder and partner at Ten-HI Gin and a proud Navy veteran. He was most proud of his family and loved each one. Eddie is preceded in death by his parents, Burton and Ruth Foshee; two brothers, Garland (Gus) Foshee, Joseph (Joe) Foshee; three brothers in-law, Bill Evans, Weldon Kennedy, and Garry Kennedy.