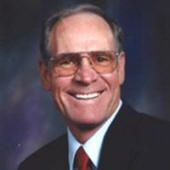 Eddie Ray “Dandy” Bingham, 81, returned to his heavenly home and entered eternal peace on December 11, 2015. Eddie was born to the late Johnnie Whitson Bingham and Vera Bell Bingham on March 14, 1934 in Brownfield, Texas. Eddie graduated from Meadow High School in 1951 and was a lifelong farmer and resident of Terry County. He married the love of his life, Peggy Keesee on July 23, 1952, and they were blessed with 63 wonderful years together. He earned his American Farmer Degree in 1953, He and his family received numerous awards, including “Outstanding Farm Family,” and “Outstanding Diversified Farmer.” Eddie served on the board of the Meadow Coop Gin for 15 years and the Meadow I.S.D. Board of Trustees for 12 years. He became a Deacon of the Meadow First Baptist Church in 1977. His faith and trust in the Lord and his immense love of his family were the source of his strength and his life’s focus.

Eddie, or “Dandy” as he was known to his grandchildren, was a kind, hardworking, and gentle man with a smile that could brighten the darkest days. His ability to make everyone who knew him feel important was a quality to be admired. He was so very proud of his children, grandchildren, and great-grandchildren, and had a special relationship with each and every one of them. Nothing brought him more joy than spending time with them. Watching them learn and teaching them the trade of his heart, listening to them play music, attending sporting events, and anything else they were involved in was a highlight to his days. Anything that was important to anyone he loved was equally important to Dandy. His kind spirit, soothing demeanor, and that amazing smile will be dearly missed by each and every person who had the privilege of knowing such a wonderful man.

Eddie is preceded in death by his parents; 2 sisters, Junell Dunn and Norma West, and a granddaughter, Holli Seaton.

Funeral Services will be held Monday, December 14, 2015 at 2:00 pm at Meadow First Baptist Church with Rev. Greg Breedlove officiating. Interment will follow at Meadow Cemetery. Family visitation will be held Sunday, December 13, 2015 from 3-5 pm at Brownfield Funeral Home. Online condolences may be made at www.brownfieldfuneralhome.com.

In lieu of flowers, the family requests donations be made to Pioneer Missions or Lottie Moon Missions in care of Meadow First Baptist Church, 301 E Moorehead Street, Meadow, Texas 79345.