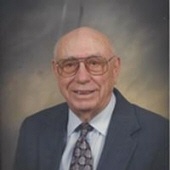 Ed passed away Monday, May 2, 2016 in Brownfield. He was born near Caddo on April 25, 1913 to Lee and Idabelle Walker. Ed grew up in the Gomez Community on a cotton farm. In 1939 he married Dean Phillips a teacher at Gomez. After marriage they moved to Dallas. Ed was ordained as a deacon in 1946. Then in 1949 Ed was transferred to Houston by the Goodyear Tire & Rubber Co. as District Credit Manager in Houston. He lived there for 51 years. Ed’s wife, Dean, passed away in December 2000 after 62 years of marriage so Ed moved back to Brownfield. Ed is also preceded in death by his parents, 2 sisters, and 5 brothers.

Memorials may be made to Brownfield First Baptist Church.