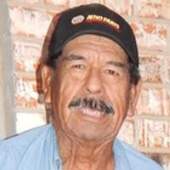 Service for Elias Mireles Sr., 75, of Brownfield will be held at 11am Saturday, February 27. 2016 at Templo Bautista Bethel with Santos Gamez officiating.

Visitation will be from 6 to 8 pm Friday, February 26, 2016 at Brownfield Funeral Home.

Elias was born in San Juan Guadalupe, Durango, Mexico on June 3, 1940 to Dionisto and Emilia Espinoza Mireles. In 1972 he moved to Brownfield where he labored in agriculture and retired as a truck driver. He was a member of Templo Bautista Bethel Church. Elias is proceced in death by his parents; 3 sisters, Pilar, Raquel and Labia Epinoza Mireles; 2 brothers, Pedro and Esquiel Mireles.