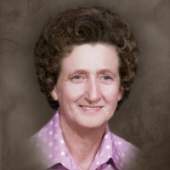 Services for Ella Heloise (Trotter) Baker, 97, of Brownfield will be held at 2 pm Monday, June 3, 2019, at Brownfield Funeral Home Chapel with Rev. Jerald Baldwin officiating. Burial will follow in Terry County Memorial Cemetery.
Heloise was born on October 18, 1921, to Charles S. Trotter and Mozella Parmenter Trotter in Throckmorton County. She moved to Terry County with her parents at the age of two. She attended Wellman School until 1936, and her parents returned to Throckmorton where she started High School in 1936 and graduated in 1940. Heloise married Glen Baker on January 24, 1948. He passed away on November 9, 2009, after 61 years of marriage. She worked 15 years at the Wellman School cafeteria. She also worked 10 years at the postal service. She was a member of the Church of Christ.
Heloise is preceded in death by her parents, grandparents, 3 sister, 2 brothers, 7 nephews, 2 nieces, an infant granddaughter, Melissa Jean Baker and a son in law, Kenneth Coats.
Heloise is survived by her children, Donna Frazier and husband Richard, Stan Baker and wife Deborah and Rhonda Coats; a niece, Floella Story Dickinson; 9 grandchildren, 13 great-grandchildren, and 3 great-great-grandchildren.