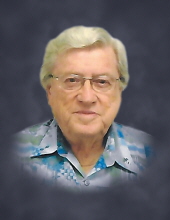 Dr. Ernest O. Cullimore, of Brownfield, Texas, departed this life to be with his Lord and Savior on Tuesday, April 27, 2021. A celebration of Ernie's life will be held Saturday, May 1, 2021, at 10:30 am, at First Baptist Church in Brownfield.

Ernest was born on January 3, 1934, in Los Angeles, California, to Lois and Ernest M. Cullimore. He grew up in Los Angeles and graduated from Highland Park's Benjamin Franklin High School in 1952. Following graduation, Ernest enlisted in the U. S. Air Force. After basic training he was stationed at Reese Air Force Base in Lubbock, Texas. During the time he was stationed in Lubbock he met the love of his life, Gwennelle Jones.

Ernie and Gwennelle married May 12, 1956, after which he spent his last year of service in Tripoli, North Africa. After spending a few years in Los Angeles, Ernie and Gwen moved to Brownfield, Texas where they lived for more than 50 years.

Ernest received his doctorate of Chiropractic from Texas Chiropractic College in Pasadena, Texas in July, 1972. Following graduation, he opened Cullimore Chiropractic at 209 South 6th in Brownfield.