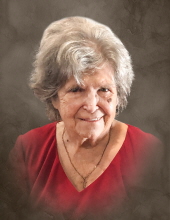 Funeral services for Etta Maude Robbins will be held at 11 am, Tuesday, June 29, 2021, at Challis Baptist Church. Burial will follow at Terry County Memorial Cemetery.

There will be a family visitation at Brownfield Funeral Home from 6pm to 8pm on Monday, June 28, 2021.

Etta Robbins, 88, beloved Mother and Wife, was called to her eternal resting place on June 25, 2021. She entered this world on November 16, 1932 in Brownfield, TX, born to Leon Naron May and Mildred Ollie May. Etta married Bruce Smith on July 4, 1946. Bruce preceded her in death on September 6, 1960. She then married Lester Robbins on December 21, 1980. She is preceded in death by husbands, Bruce Smith and Lester Robbins, 2 great grandsons Gideon Smith and Joshua Gilbert, four brothers and two sisters.