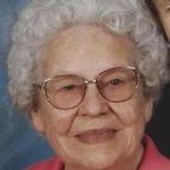 Services for Etta Thelma Smith, 88, formerly of Brownfield, will be held at 2pm Saturday, August 16, 2014 at Brownfield Church of Christ with Bob Reynolds officiating. Burial will follow in the Loop Cemetery under the direction of Brownfield Funeral Home.

Visitation will be held at Brownfield Funeral Home from 6-8pm on Friday, August 15, 2014.

Etta passed away on Wednesday, August 13, 2014 in Vernon. She was born February 20, 1926 in Tokio to Thomas and Essie Day and attended school in Terry County. She married John Smith on September 28, 1942 in Brownfield. He preceded her in death in 2006. Etta was a member of the Church of Christ.