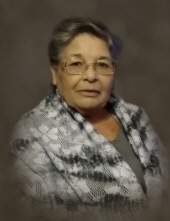 Memorial services for Eudelia Gonzalez are pending at this time.

Eudelia was born to Catarino Gonzalez Sr. and Maria Cantu Gonzalez in Rock Springs, Texas. She was a loving person that helped raise everyone’s children. She never had children but was like a mother to everyone. Eudelia was a member of St. Anthony’s Catholic Church.

Eudelia is survived by four brothers and two sisters, Estevean Gonzalez and wife, Linda, of Lubbock, Elva Davila and husband, Santiago, of Meadow, Alberto Gonzalez of Houston, Ricardo Avila of Seguin, Brenda Gonzalez of Brownfield; and many nieces and nephews.