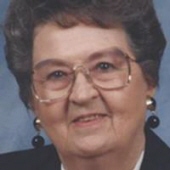 Services for Francille Henson Smith Price, 94, of Lubbock will be held at 11am Friday, April 10, 2015 at Meadow First Baptist Church.

Francille was born on January 28, 1921 outside Durant, Oklahoma to George and Edna Henson. She passed away on April 6, 2015 in Lubbock at the age of 94. Francille and her family moved to Terry County in 1926 when she was 5 and settled in the Challis Community just north of Brownfield. She attended and graduated from Meadow School. She played on the State Basketball team in 1938. Francille was a member of the St. Luke Methodist Church in Lubbock and married James Webster Smith in 1939. She farmed one year and ginned the first bale of cotton in Terry County in 1968. She later moved to Lubbock where she worked for and retired from Plains National Bank of Lubbock, after 25 years of service. Francille also volunteered as a Pink Lady at the Methodist Hospital, now Covenant Hospital until her health prevented otherwise.

The family suggests donations to the charity of your choice in lieu of flowers.