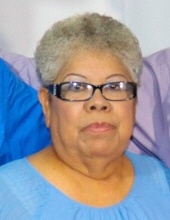 Funeral services for Francisca Escobedo Aguilar, 74, of Meadow will be held at 10 am Thursday, January 9, 2020, at St. Anthony’s Catholic Church with Father Jose Kochuparambil officiating. Burial will follow in the Ropesville Cemetery under the direction of Brownfield Funeral Home.

Rosaries will be held Tuesday and Wednesday, January 7th and 8th, 2020, starting at 6:30 pm at Brownfield Funeral Home.

Francisca was granted her angel wings on January 5, 2020. She was born on October 4, 1945, in Choate, Texas to Andres and Elvira Escobedo. She married her beloved husband, Ermilo Aguilar, on October 24, 1964, in Needmore, Texas. Francisca was a homemaker and devout Catholic. She attended St. Anthony’s Catholic Church where she was a Guadalupana, Cursillista, and Eucharistic minister. She was a loving wife, mother, grandmother, sister and aunt. She embraced everyone with open arms. Francisca will forever be remembered for her love of dancing, laughter, and playing on her tablet.