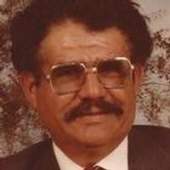 Services for Francisco Cavazos Jr."Pancho", 79, of Meadow will be held 10am Saturday, April 5, 2014 at the Meadow First Baptist Church. Burial will follow in the Meadow Cemetery under the direction of Brownfield Funeral Home.
There will be a family visitation on Thursday and Friday on April 3 & 4 2014 at Brownfield Funeral Home.
Francisco was born April 16, 1934 in Weslaco to Francisco Cavazos, Sr. and Andreita Villapando Cavazos. He married Imelda Mancilla February 14, 1960 in Weslaco. Francisco was preceded in death by his parents, Franciso and Andreita Cavazos, a brother and a sister.
Francisco is survived by his wife, Imelda Cavazos; 5 children, Ray Cavazos of Meadow, Sylvia Duran and husband, Celso, of Brownfield, Richard Cavazos and wife, Bea, of Meadow, Dianna Cavazos of Meadow, Robert Cavazos and wife, Jessica, of Brownfield; 19 grandchildren; 11 great grandchildren; two sisters; and two brothers.