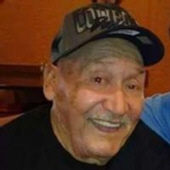 Funeral services for Frank C. Flores will be held 10am Monday, April 17, 2017 at St. Anthony’s Catholic Church. Graveside services will follow in the Brownfield Cemetery under the direction of Brownfield Funeral Home.

There will be a rosary held at 6pm Saturday, March 15, 2017 at Brownfield Funeral Home.

Frank was born January 29, 1936 in Gonzales to Valdomero and Inez Flores. He worked in the oil field and then the Lea County Event Center. Frank was a very friendly man who never got mad at anyone. Frank is preceded in death by his parents, Valdomero Flores and Inez Moreno, sister, Mary Baily, and brother, JC Moreno.