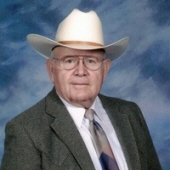 November 23, 1933 - December 3, 2018
Frankie "Frank" Don Kidd, 85, went home to be with his Lord on December 3, 2018. Funeral services will be held at First Baptist Church Chapel in Brownfield, Texas, on Thursday, December 6, at 2:00 pm with Dr. Matthew Baird officiating. Interment will follow at 4:30 pm in the Gaines County Cemetery under the direction of Brownfield Funeral Home.
Frank was born on November 23, 1933, to Vester and Elsie Kidd in Dawson County. He married the love of his life, Betty, on July 25, 1953. He served his country as a medic in the Army and moved to Brownfield in 1975. As a long-time member of First Baptist Church in Brownfield, his faith and relationship with the Lord were evident in his words and actions. Anyone who knew him described his kind and gentle spirit. He was always the first to lend a helping hand. He served as a Gideon and a member of the Masonic lodge. His life was spent in the oilfields of West Texas as an old-school oilfield man, and one of his favorite things to do was to reminisce of those times. He loved to hunt deer and spend time camping. He loved his family well and was beloved by all who knew him.
He is preceded in death by his parents; his wife, Betty Kidd; three brothers, Dale, Marvell and Truman Kidd; and two sisters, Maxine Wright and Jonelle Lucas. He is survived by his three loving daughters: Sheri Wood and her husband, Wayne of Amarillo, Linda Kennedy and her husband, Randy of Andrews, and Donna Prosser and her husband, Doug of Carrollton; two sisters: Sue Courtney of Lubbock and LaRue Courtney of Odessa; his six adoring grandchildren: Chris Wood, Greg Kennedy and wife Brooke, Angela Kennedy, Ryan Kennedy and wife Logan, Mitchell Prosser, and Devin Prosser; 7 great-grandchildren: Neeley Wood, McKenna Wood, Blake Kennedy, Kinzy Kennedy, Hudson Pittman, Dean Kennedy, and Dylan Kennedy; many wonderful nieces, nephews, great-nieces, great-nephews and friends. Special thanks is expressed to the staff, nurses, therapists, and doctors at Sandy Lake Nursing and Rehabilitation for their care and kindness.
In lieu of flowers, the family respectfully requests donations be made in Frank Kidds name to the Parkinsons Foundation (www.Parkinson.org) or to First Baptist Church in Brownfield, Texas.