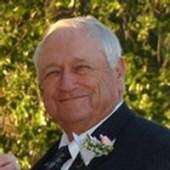 Freddie Allen Howard was born on January 2, 1933 in Haskell, Texas, and passed away August 5, 2017 at his home in Brownfield, Texas.

Freddie was the patriarch of his family, and nothing meant more to him than that. His door was always open and he was always up for an impromptu visit or game of dominoes. The love that he and Billie had for each other was an inspiration to everyone that knew them. He was larger than life, and if you ever met him, you never forgot him. One of his favorite accomplishments in life was being commissioned by Governor Dolph Briscoe, as an Admiral in the Texas Navy. He farmed in Terry County for more than fifty years. Freddie owned several successful businesses over the years, and was an avid racehorse enthusiast. He was a longtime democrat and loved to sit and talk politics and current affairs with family and friends. He had the best sense of humor and a contagious laugh. He loved to play jokes on his children and grandchildren, and he and Billie always made sure that every member of their family knew how much they were loved, and all believed that they were the favorite child/grandchild.