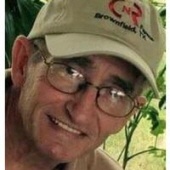 Services for Freddy Lee Sims, 65, of Brownfield will be held at 10am Saturday, November 21, 2015 at Terry County Memorial Cemetery with Dale Matlock officiating.

Freddy was born May 12, 1950 in Brownfield. He graduated from Brownfield High School. Freddy married Patricia Mae Russell on August 26, 1969 in Brownfield. He worked for the City of Brownfield as a Serviceman for 21 years. Freddy was a loving husband, father, grandfather, and brother. He loved fishing, boating, camping, working in the yard, and most of all spending time with his grandchildren. Freddy loved his country. He is preceded in death by his stepfather, Martin Stucker.