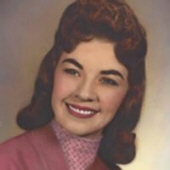 A family visitation will be held from 6pm to 8pm Friday, January 2, 2015 at the Brownfield Funeral Home.

Gail was born on October 9, 1937 in Brownfield to Gene and Willeen Davis. Gail graduated from Brownfield High School and then attended Texas Western for a year. She then proudly attended Texas Tech for two years where she was a majorette with the Texas Tech band. She married Dean Curtis on April 1, 1963 in El Paso. Dean preceded her in death on August 24, 1976. Gail was an insurance agent for several years and then owned her own business, Texas Cellular, for three years. Gail was a mother beyond belief, raising three great children on her own. Everyone that she met was a friend because of her outgoing nature.

The family wishes to extend special thanks to Dr. Luke Hinshaw, Natalie and their team.