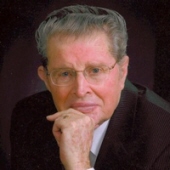 Service for Gene F. Hickson, 82, of Brownfield will be held at 10am Saturday, May 18, 2019, at Calvary Baptist Church with Rev. Steve Carter officiating.
Gene was born on July 21, 1936, in Brownfield to Oscar and Lois Hickson. He graduated from Brownfield High School. Gene married Carole on July 27, 1958. They had one precious daughter, Gena Hickson Holmes who is married to our dear son-in-law Bud. Gene served in the army from the end of 1958 to 1961. He was stationed in Missouri and South Korea. After returning home he resumed his job with Atlantic Richfield which later become Amoco and retired in 1994 after 27 years of service. Gene loved the Lord, his church and his family and was a devoted member of Calvary Baptist Church.
Gene is survived by his wife, Carol Hickson; daughter, Gena Holmes and husband Jerry "Bud" Holmes and a brother, Eddie Hickson.