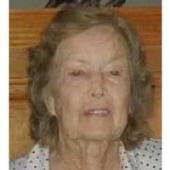 Funeral services for Eva Geneva Pruiett of Brownfield will be held at 2pm Thursday, April 7, 2016 at Abundant Harvest Community Church with Rev. Jerold Baldwin officiating. Burial will follow at Terry County Memorial Cemetery under the direction of Brownfield Funeral Home.

There will be a family visitation from 10am to 12pm Thursday, April 7, 2016 at Brownfield Funeral Home.

Geneva passed away Monday, April 4, 2016 in Lubbock. She was born March 28, 1937 to Sam William and Lela Ann Mobley in Kingston, Ok. She married Clyde Pruiett on November 19, 1951 in Lovington, NM. Geneva was a member of Abundant Harvest Community Church. Geneva was not only a homemaker but helped with whatever was needed. She is preceded in death by her parents, Sam and Lela Mobley, husband, Clyde Pruiett, daughter, Linda Pruiett, and 3 sons, Curtis Wayne, Jay Edwin, and Claude Eugene Pruiett, brother, Leslie, and sister, Edith.