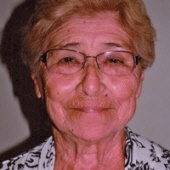 Funeral service for Geneva Garcia Vera, 85, Brownfield will be held 10:00 am Wednesday, January 30, 2019 at St. Anthony's Catholic Church with Monsignor Gerald Leatham. Burial will follow at Lamesa Cemetery under the direction of Brownfield Funeral Home.
There will be a rosary at 6:00 pm Tuesday, January 29, 2019 at Brownfield Funeral Home Memorial Chapel.
Geneva Garcia Vera was born in Yoakum, Texas, on August 16, 1933.
The direction of her early years started with her move to Lamesa, Texas, in 1943. But the most remarkable move was when she met the love of her life, Carlos Vera, and they married on July 21, 1951. Carlos and Geneva lived in Lamesa until 1953 when they moved to Brownfield, Texas.
Geneva worked for Brownfield Independent School District for 5 years as a Teaching Assistant at Oak Grove Elementary School. She then worked for several years at the Terry County Daycare until she retired.
Geneva is survived by one son Carlos G Vera, Jr and wife Bettie of Lubbock Texas; four daughters: Connie Galvan and husband Tony, Sylvia Reyna and husband Ray of Odessa, Texas; Rose Ann Perez and husband Rudy and Erma Rivera and husband Ramon of Brownfield, Texas.
Geneva has two brothers Joe Garcia and wife Angie of Amarillo, Texas; Sergio Garcia and wife Maria of Katy, Texas; nine sisters: Letica Kaminski and husband Larry of Del Rio, Texas; Maria Jejani and husband Allie of Dallas, Texas; Elvira Williamson and husband Terry, Sylvia Garza and husband James of Midland, Texas; and Yolanda Chapa and husband Eddie, Alicia Hernandez and husband Raymond, Lydia Zapata and husband Jesse, Norma Garcia and husband Huss, and Elsa Garcia all of Lubbock, Texas. She also has 13 grandchildren and 31 great-grandchildren.
She was preceded in death by her husband Carlos Vera, parents, one granddaughter, and one great-granddaughter.