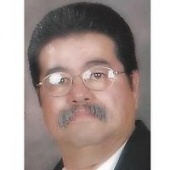 Service for George Lee Muniz will be held at 2pm Saturday, April 16, 2016 at St. Anthony’s Catholic Church with Father Eduardo Teo officiating. Burial will follow in the Brownfield Cemetery under the direction of Brownfield Funeral Home.

Visitation will be from 6-8 pm Friday, April 15, 2016 at Brownfield Funeral Home Memorial Chapel.

George Lee Muniz was born February 15, 1953 in Nixon. His parents were Narciso and Mary Lou Muniz. He was the second born in his family of seven siblings. He married his bride of 43 years, Enedina Muniz, on September 16, 1972 in Brownfield. They lived and raised their family, Roger and Rene, in Brownfield for 37 years. He and his wife moved to San Antonio in 2009 to be near to their three beautiful grandchildren, Madison, Lyndee and Zachary. His days were filled tinkering in his garden, playing bingo and traveling with his grandchildren to their sporting events.