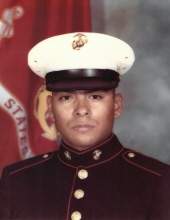 George passed away on Wednesday, August 26, 2020, in Lubbock. He was born on February 3, 1965, in Lamesa. His parents were Juan and Clara Ramirez. He served in the United States Marine Corps. George married Irma Lira on May 1, 1986, in Brownfield. George loved his family and enjoyed woodworking.

Livestream can be viewed at http://calvarybrownfield.org/livestream