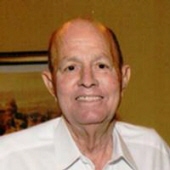 A memorial service for Gerald Ray Jordan, 78, of Brownfield will be held on Saturday, May 21, 2016 at 10am at Brownfield First Baptist Church Chapel with Dr. Matt Baird officiating.

Gerald was born on September 17, 1937 to Everett Jordan and Lenora Wilson in Ravia, Oklahoma. He graduated from Wellman High School in 1955 and lettered in football, basketball and track. Gerald married Barbara Jane Sparkman on August 6, 1960 in Brownfield. He began farming in 1962 and was a member of the Terry County Sheriff’s Posse, Terry County Co-op Gin board member, Farm Bureau board member and coached little league. He enjoyed hunting and fishing. Gerald is preceded in death by his parents and a brother, Kenneth Jordan.