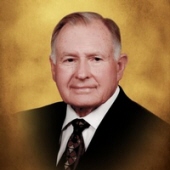 Funeral services for Gordon Douglas Patton will be held at 2pm Wednesday, June 13, 2018, at Brownfield First Baptist Church with Dr. Matt Baird officiating. Private graveside services will follow under the direction of Brownfield Funeral Home.
Family visitation will be held Tuesday, June 12, 2018, from 5pm to 7pm at Brownfield Funeral Home.
Gordon passed away Sunday, June 10, 2018, in Brownfield. He was born December 8, 1926, in Brownfield to Grady and Evadeen Patton. Gordon graduated from Brownfield High School. He served in the United States Army during World War II. Gordon married Betty Joyce James in ODonell on April 21, 1951. Gordon chose farming over college and started farming for himself at the age of 19 and continued until he was 80 years old. He was a lifelong member of the Brownfield First Baptist Church where he was an usher for many years. He was also a member of the VFW. While farming was his second love, his family was his first. He lived for his kids and grandkids and put everyones needs first. Gordon is preceded in death by his parents, daughter, Debra Denise "Debbie" Beasley, and sister, Mary Ellen Moore.
Gordon is survived by his wife, Betty Patton of Brownfield; two daughters, Tammie Bayouth of Abilene, Dana Hamm and husband, Ace, of Brownfield; five grandchildren, Lexie and Addison Bayouth of Abilene, Tanner Hamm and wife, Jerrah of Lubbock, Breck Hamm, Randall Beasley and wife, Autumn of Ropesville; four great grandchildren, Copelin and Lochren Hamm both of Lubbock, and Avery and Isla Pearl Beasley of Ropesville.