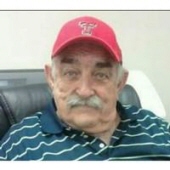 There will be a family visitation from 6pm to 8pm Sunday, July 30, 2017 at Brownfield Funeral Home.

Greg passed away Thursday, July 27, 2017 in Lubbock. He was born September 27, 1943 in Okay, AR to Carl and Myrtle Dellinger. Greg attended Bryan Adams High school in Dallas. He served in the United States Navy. Greg became a Master Plumber on November 19, 1973. He married Linda Mae Wagner on December 21, 1979 in Mentone, Texas. Greg served as president of the Terry County Fair Association for several years. He is preceded in death by his parents and two sisters.