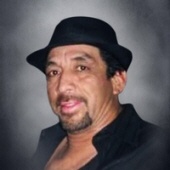 Services for Guadalupe Mata Jr., 52, of Brownfield will be held at 10 am Friday, June 8, 2018, at St. Anthonys Catholic Church with Father Eduardo Teo officiating. Interment will follow at Brownfield Cemetery.
Viewing will begin at 12 pm Thursday, June 7, 2018. The family will receive guests at 5 pm with a rosary following from 6-7 pm at Brownfield Funeral Home.
Lupe was born on September 16, 1965 to Guadalupe and Santos Mata in Brownfield. He was known for his sense of humor and his attempts to scare the living daylights out of those he loved. His familiar question, "What in tarnation are ya doin?" still rings in the ears of his family and friends. "Lupe Love" was a Harley Davidson fan and loved his Tampa Bay Buccaneers, Texas Tech Red Raiders and San Antonio Spurs. He had a passion for music and was a singer and songwriter. He was a hard worker and did an excellent job filling some big shoes as he took over Matas and Sons Trucking after the loss of his father. He was extremely proud of all of his children and taught them that family always comes first, a lesson instilled in him by his father. To everyone he was a joy to be around and will truly be missed. Guadalupe is preceded in death by his father, Guadalupe Mata, Sr. and a grandson, Aiden Marco Burns.
Lupe is survived by his mother Santos Mata; his children, Stephanie Gutierrez of Wolfforth, Samantha Jones of Lubbock, Staff Sgt. Guadalupe Mata, III (Kirsti) of Ft Belvoir, VA, and their mother, Geneva Mata; daughter, Jackie Mata (Tanner) of Stinnett; his grandchildren, Alexis Ortega, Danny Ray Mata, Ashton Burns, Serina Grace Jones, Zacchaeus Gutierrez and Daxton James Mata; his brothers, Reynaldo Mata (Clayton) and Roberto Mata; and his sisters, Isabel Vera (Frank), Lucy Rodriguez (Randole) and Michelle Jenkins (Cody); his girlfriend, Corina Trevino and numerous nieces, nephews, family and friends.