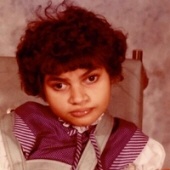 Guadalupe Villarreal passed away on October 22, 2017 in Brownfield. Funeral services for Guadalupe "Pita Bear" Villarreal will be held 10am Thursday, October 26, 2017 at St. Anthonys Catholic Church with Father Eduardo Teo officiating. Burial will follow in the Brownfield Cemetery under the direction of Brownfield Funeral Home.
There will be a family visitation on Wednesday, October 25, 2017 from 5pm to 7pm and a rosary following from 7pm to 8pm.
In the year of 1989 she graduated from South Texas High School for the Disabled at San Benito, Texas. She was given a nick name "Pita Bear" by a little boy at school who liked her. The nick name followed her with family and others. She was born on August 20, 1967 in Brownfield to Herminia and Luis Villarreal, Sr. Pita Bear enjoyed for her sister to sing to her. She could not talk but she would let her know when enough is enough. She enjoyed watching TV, listening to music and going on bumpy rides in the car. Due to her disability she couldnt age like others. For this reason Pita Bear was always "Our Little Baby Girl". She will be missed by her mother, brothers, sister, uncles, nephews, and all that knew her. She is preceded in death by her father, Luis Enrique Villarreal Sr. and brother, Enrique Villarreal.
Pita Bear is survived by her mother, Herminia Villarreal of Brownfield; sister and caregiver, Gloria Salas of Brownfield; brothers, Hector Villarreal and wife Juanita of Granbury, Luis Villarreal Jr. and wife Janetta of Abernathy, and Jaime Villarreal of Lovington, NM.
The family would like to extend a special thanks to Nurses Unlimited in Lubbock, Legacy of Love Hospice, and the Brownfield Hospital.