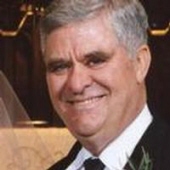 Ken was born in Pauls Valley, Oklahoma, on December 11, 1938, to Al and Vera Muldrow. He moved to Brownfield, Texas, in 1945. He graduated from Brownfield High School in 1957 where he played football, and then went on to the University of Oklahoma where he was in the Beta Theta Pi fraternity. He also played football his freshman year under Bud Wilkinson. After earning his business degree from O.U., he obtained his law degree from the University of Texas in 1964.

He married Rita Goodpasture, whom he had known since the first grade, on October 10, 1964. They were married for 49 years. They spent two years in the army at Fort Lewis, Washington, where he attained the rank of captain.

They came back to Brownfield in 1966, when Ken went to work for Goodpasture, Inc. In 1972, after the death of his father-in-law, Grady Goodpasture, he took over as CEO. He remained as CEO until his retirement in 2004.

Ken loved the Oklahoma Sooners football team. He was an accomplished pilot who flew single and multiple engine airplanes all over the United States. He enjoyed hunting and especially loved fishing. Ken loved to travel. He and Rita traveled all over the world and the U.S.

Burial will be at Terry County Cemetery at 9:30 am Wednesday, May 14, 2014. The memorial service will be at 10:30 am at the First United Methodist Church, Brownfield with Rev. Ruby Moultrie officiating.

Donations in Ken’s memory may be made to the First United Methodist Church, Brownfield, TX. 1004 E. Broadway.