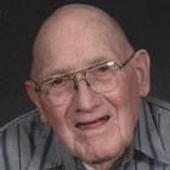 Memorial Service for Harold John Matteson, 88, of Brownfield will be held at 10:30am on Saturday, August 2, 2014 at Brownfield First Baptist Chapel with Dr. Carl Moman officiating. A visitation will follow in the Fellowship Hall.

Harold was born on March 12, 1926 to Johnnie and Bessie Matteson in Vernon Center, MN. He passed away on July 27, 2014 in Brownfield. Harold married Mary Ellen Yeager in Delavan, MN on September 17, 1948. He was a member of the Brownfield First Baptist Church, Lion’s Club and Caprock Peace Officers Association. Harold served in Law Enforcement for 20 years. He was Chief of Police in Spur for 10 years and Chief Deputy for Terry County Sheriff’s Department. He also worked for 20 years at John Deere and 23 years at Wal-Mart. Harold is preceded in death by his parents, Johnnie and Bessie Matteson; a brother, Lloyd Matteson and 3 sisters, Dorothy Wallace, Doris Cordes, and Ruth Stengel.

Harold is survived by his wife, Mary Matteson of Brownfield; 3 sons, David Matteson of Lafayette, GA, Daniel Matteson of Childress and Gordon Matteson of Waxahachie; 5 daughters, Nancy Higgins of Hermleigh, Marilou Skipper of Abernathy, Barbara Rael of Midland, Connie Stanley of Stanford and Heidi May of Allen; 16 grandchildren and 16 great grandchildren.