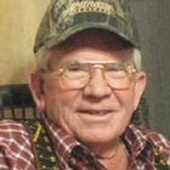 Services for Herbert “Herbie” Edward Pickett, 72, of Brownfield will be at 2pm, Thursday, May 15, 2014 at Calvary Baptist Church with Rev. Steve Carter officiating. Burial will be in Terry County Memorial Cemetery under the direction of Brownfield Funeral Home.

There will be a family visitation on Wednesday evening at the funeral home from 6-8pm.

Herbie passed away at his home in Brownfield on Tuesday, May 13, 2014 surrounded by his loving family. He was born on June 9, 1941 in Brownfield to A.T. and Kathleen (Perry) Pickett. He attended Brownfield schools and graduated from New Mexico Military Institute in Roswell. He married Sharon Thomas on June 9, 1961 in Union. He was a pumper for over 30 years where he worked for Amoco, Fina, First Permian and then Energen Resources retiring in 2011. The love of his life was his grandkids, woodworking, ham radios and horses. He was a past member of the Terry County Sheriff’s Posse and Terry County Amateur Radio Club. He was a member of Plains Baptist Church.

The family would like to extend a special thank you to Herbie’s caregivers, Interim Home Health and Interim Hospice.