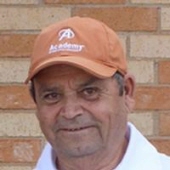 A Memorial Service for Herman R. Gonzales, Sr, 78, of Plains will be held at 10am on Tuesday, January 13, 2015 at Plains First Assembly of God with Jon Patrick officiating. A rosary will be held at Sacred Heart Catholic Church in Plains from 6-7pm on Monday, January 12, 2015.

Herman went to be with the Lord on Friday, January 9, 2015 surrounded by family. Herman was born on April 13, 1936 in Lagos de Moreno, Jalisco, Mexico. He married Gloria De Los Santos on November 17, 1965. Herman worked on a farm all his adult life. He was a very hard working man with great character and integrity. He loved the Lord, his family, reading the word of God and gardening.

Herman is preceded in death by his parents and a granddaughter, Aubrey Gonzales.